Continue Reading
on October 28, 2009 in Inspirations 3 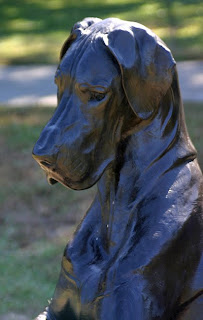 One of the reasons I was excited to visit Brookgreen this year was the selection of Louise Peterson as one of their sculptors in residence for 2009. I was quite disappointed this past spring when I couldn’t make her seminar “Modeling the Dog” work with my schedule. But I suspected that with her there, the park would probably bring out most of its canine collection, and there were pieces that had not been on display in years past that I hoped to see.

(Although the park displays hundreds of pieces at any given time, with a collection of 1,200 there are always pieces that are either on loan to other institutions or are in storage.) 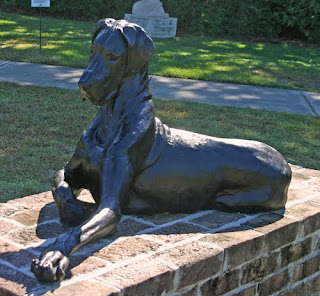 “Bella and the Bug” by Louise Peterson. Peterson has a special interest in Danes, and having owned a part-Dane I have always admired her ability to capture their typical postures. 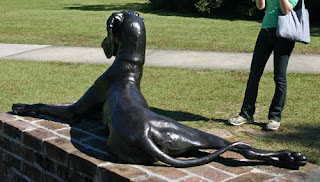 I loved how she sculpted the curve of the dog’s back and shift of the shoulders. As someone who works with horse anatomy, the flexibility dogs have in this regard is always intriguing to me.

I wasn’t disappointed. In fact, one of the first pieces we encountered was Anna Hyatt Huntington’s “Deerhounds Playing”. I had long wanted to see it in person, after having read about it in an article about the Huntington’s Deerhound breeding program. (The Huntingtons founded the first Deerhound kennel in the United States.)

If this particular piece had been on display in the Garden before, I had managed to miss it. The park is really big and things do move around, so that’s always possible! 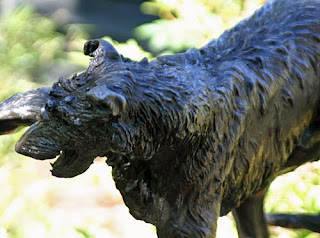 The dynamic poses on the two dogs made it really hard to photograph them. I wish now I had taken more shots of the fur. I had read that Huntington’s treatment of the fur was a bit different on this piece than on many of her others. Hair is something I struggle with myself, so how other artists approach this is very interesting to me. I wish I had thought to take more close-up comparison shots. (I think this will be my excuse to go back again soon…)

I did get a lot of details detail pictures of “Adonis” by Eli Harvey. The piece is simply masterful. (There is a shot from the front angle in the trip report on Sarah’s blog, too.) 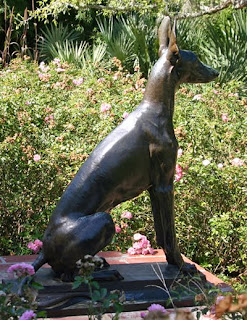 What I find interesting is that this sculpture is supposed to portray a young (8 month old) Greyhound. It was sculpted in 1905, so perhaps erect ears like those on the sculpture were more common in the breed then. The ears and his build give him the look of an Ibizian Hound or Pharoah Hound – at least to me – but those breeds weren’t introduced in this country until long after the sculptor’s death.

The sighthounds that were common during the time most of the Brookgreen sculptures were made (early 1900s) are certainly well represented. In fact the majority of the canine sculptures are of Greyhounds and Whippets. 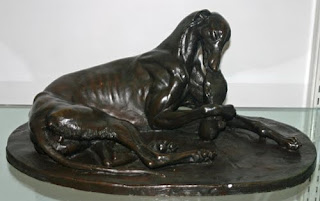 I believe this is a Huntington piece. 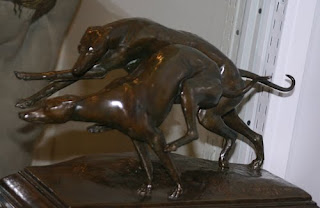 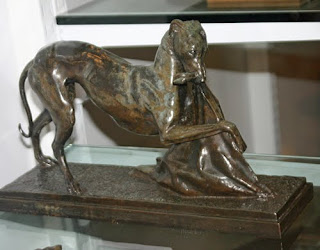 “Whippet” by Katharine Lane Weems. I’ve always been very fond of this one! 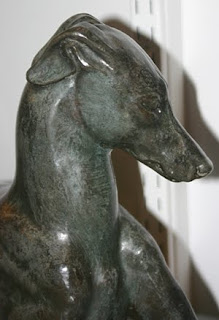 There is also a life-sized Wolfhound by Zenos Frudakis near the entrance to the Brookgreen Zoo. It was another piece where I found the hair treatment very interesting. You can also see the hollows that make the iris on bronze sculptures. It gives the eyes a very natural look at a most angles, if you are standing at the normal viewing distance. It did make me wonder what the effect might be if we tried that in ceramic. I suspect it would be less effective! 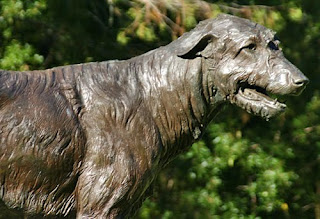 This guy has eyes that are sculpted in a way far more familiar to those of us who work in the model horse community. The softened style of this particular sculpture, “The Guardian” by Sahl Swarz, has always reminded me of the ceramic artist Maureen Love. 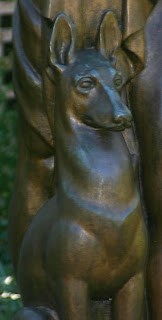 Looking at all these dogs has made me want to pull out the small Collie I started a few years ago. I had wanted to make one for my grandfather, who grew up on the banks of Pompton Lake not far from historic Sunnybank. His family had Collies and he passed that love on to me, so I thought it would be nice to make a “proper” Collie for him. (He had quite a number of ideas about what constituted a proper Collie.) Unfortunately I didn’t get much further than bulking out the armature and assembling reference pictures of old-fashioned dogs before he passed away. Someday, though!